Are your employees embarrassed by your digital brand?

As many as one in five are embarrassed by the online activity of the company they work for. How can we turn this around? Our jobs do not define us. Or maybe they do, just a little bit. Many of us spend half of our waking hours a day at work, which adds up to a lifetime average that we'd probably rather not think about – so the work we do can't help but make up a large part of our identity, whether we want it to or not.

But is it part of our identity that we're comfortable sharing? Traditionally it was – a certain job role in a certain industry was a source of pride, and the classic "so, what do you do?" question broke many an ice. But that might not be the case anymore.

But hang on, what about LinkedIn? A network built around sharing everywhere you've ever worked might throw a spanner in our works a little bit – people are clearly happy to share where they work on there, and it seems pretty ubiquitous in business circles at this point.

However, according to ONS stats, the UK has a workforce of about 32 million people, while LinkedIn has a UK userbase of 20 million. We can assume it has a large number of unemployed users too, as LinkedIn traffic tends to correlate directly with unemployment rates – when unemployment goes up, so too does LinkedIn traffic.

So, it's fair to assume that at least a third of the working population of the UK avoid LinkedIn and, as 31% of 32 million people is just shy of 10 million, we can also speculate that as many as half of the people using LinkedIn in the UK could be unemployed.

Facebook, on the other hand, has 42 million UK members, while research suggests that at least 72% of people in work use the social network. That translates to 23 million employed Facebook users at the very least, with the total number likely to far outstrip LinkedIn's combined employed and unemployed totals. This means that only a fraction of in-work people are using the employment field on their profiles.

So, what could the reasons be for keeping quiet?

Today, jobs and contracts are less stable, freelancing is on the rise, and young people in particular change roles more and more, leading people to identify less with the work that they do. Even those in more stable employment may feel the effects of this change in attitudes towards work.

It should come as no surprise that people are becoming more and more wary of oversharing on social media – as networks and technology becomes more and more invasive, many people are reacting by giving less of themselves away, with details that people don't need to know (such as where we work) being left out of profiles.

Worst of all – embarrassment?

Over the past decade, we've worked with dozens of companies, and researched hundreds more – and we can see why people might sometimes be unwilling to associate themselves with their employers online sometimes!

We even look back on our own early marketing efforts and wonder what we were thinking – just mention the ill-fated baking photoshoot to anyone who was here to experience it, and watch the cringes happen.

Branding and content can quickly become outdated online – it's a big reason why many companies feel the need to give things a refresh. How your employees feel about your digital brand could be a big indicator that it's time for a change.

Are people embarrassed by where they work?

When answering our survey, 23% of people in work said that they were embarrassed by the online branding or perception of the company they worked for - that's more than one in five. Younger age groups were by far more likely to be embarrassed by their employers online, correlating very closely with how likely that group was to use Facebook. We've put it all in a handy table:

It stands to reason that having a closer relationship with social media means you're more likely to catch sight of what your employer is doing on social media. It seems that the youngest age group are proportionately slightly more likely to be embarrassed by their employer's online antics than any other, with a higher percentage among less users than the 35-44 age group – but there's not much in it. Anyone of any age can despair at the online behaviour of the company they work for.

What could be embarrassing your employees?

Well, who's to say? But we do have a few suggestions that typically cause a twinge of despair when we look at a brand online – and everyone will pick up on them, from employees to customers.

Web design changes fast – but not that fast. While some features on a website might be superseded by some new technology or a new trend within a couple of years, a few of last season's plugins aren't going to cause anyone any embarrassment.

If your website and branding look like they come from 2007, on the other hand, it might be another story altogether. A strange mish-mash of fonts and colours, pop-ups, aggressive stock photo usage, flash intros, websites that don't even work properly on mobile – these are all signs that it's time for a shake-up.

Baby picture time! Is this really what we used to look like? Give us a break, it was a decade ago. We've come so far since then...

And it doesn't stop at websites – outdated design can creep into marketing material too, whether that's social media headers, emails, display ads – everything.

Misspellings. Poor grammar. Too many exclamation marks. Not enough paragraph breaks. It just hurts to look at, to be honest.

Getting things wrong on social can make for a disastrous first impression. A big part of why we focused on social media sharing in our research was because, even with the best web presence everywhere else, a brand can so easily be sunk by bad social.

Letting outdated design and bad writing creep into profiles is one thing, but oversharing, blurry photos, attempts to hop on memes or bandwagons… it can make for a presence that people don't want to associate with, even if they enjoy their day job!

Time for a change?

We're not saying your employees are embarrassed by you – we don't know them personally! But if you feel like you could, nay, should, be doing a few things better, then it's never too late.

If you click the banner below, you'll be able to download our guide to writing a brief for a new website – it'll take you through everything you need to do to achieve the web presence you want. And if you have any questions for us, then please don't hesitate to get in touch. 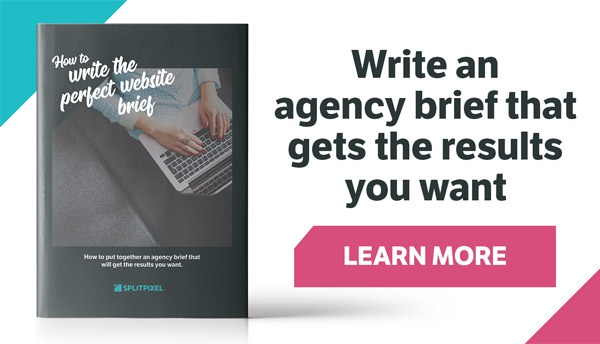